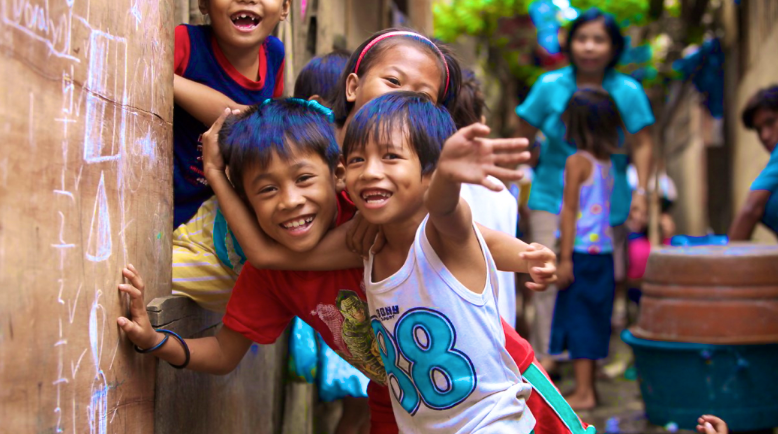 Children all over the world have games, and we were no different. We played “tag” and “Rock, Paper, Scissors” like children everywhere, but we had our own simple games too; ones that had been played for many generations using things that could be found, or made from what was around us.

I loved to play pitiw. It’s played with two sticks; one that’s about a yard long or a little shorter, and the other maybe six inches long. We mostly played on the dirt. You make a tiny slot on the dirt and you hit the little stick with the big stick. Most of the time it is played as a team, single or double or triple, however many kids want to play. There is a serving team, and receiving team. As the serving team, you pop the little stick up in the air, then hit it with the big stick and the receiving team has to catch it to get a score. Whoever gets 100 points first, wins.

Other games we played included hide and go seek, and patentero. In patantero you draw a line in the dirt, then make a series of squares. The offense is inside the squares, while the defense is outside. The offense has to cross those lines from one box to the other without getting tagged by the defense until they are through with four or five boxes.
For each line there is one defender who you have to try to maneuver past to get into the next box without getting tagged.

One of my favorites was muko-puko-ay. This game is played by drawing one big box in the dirt, and outside the box, two lines for the serving team. Boys and girls play together. The game is played with a tiny ball made of coconut leaves. One team is inside the box and the other team has the ball and serves. The serving team tries to eliminate the people inside the box by hitting them with the ball.
Once you are hit, you are out of the box, one by one. And when there is one remaining, the serving team has three chances to hit that remaining player. If they don’t hit him in those three chances, the rest of the team will go back in and the game will continue. It was my favorite because I would almost always be the last one, because I was the quickest one to see the ball and dodge it—but sometimes when boys throw it, it hurts!

I could throw it hard too though.

My favorite was simply swimming and playing in the water.
At that time the bridge in Guinob-an wasn’t cement, it was just big logs going across the inlet. During high tide, the water in the inlet was beautiful; blue and clear. During those times, all of us kids would go swimming, diving from the bridge. I loved to do this. Also, at the beach on the western end of Guinob-an there are big rocks that we would climb and dive from into the water. We would get a fist-sized rock, and then we would climb up on the big rock, then throw the rock into the water and dive altogether, and have a race to see who would get the rock first. Whoever got the rock, could throw it the next time.

There were more games for sure but those are the ones I remember.