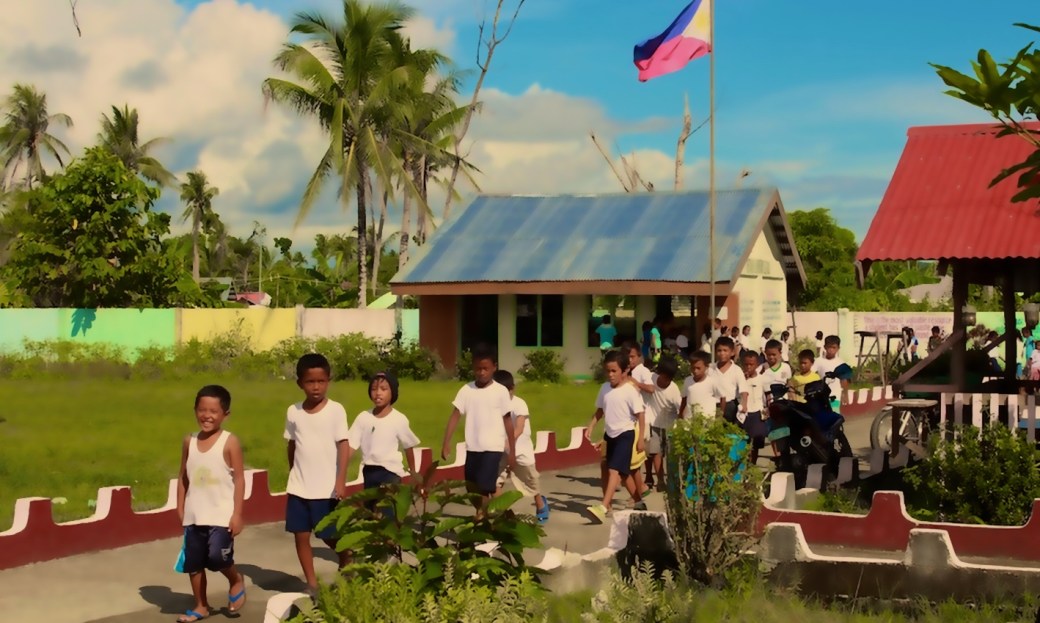 At this time, living in our house were my parents, my brother Rommel, two grandchildren Yolanda and Eileen who were the daughters of my sister Alma, who was in Manila, and my sister Rowena. The other brothers and sisters by this time had their own families and lived in their own small houses. Some were adjacent to the main house where we lived. Eva and Ronnie each had a family and each had their own small bahay kubo—a native thatch home. Others were scattered farther through the town, and one or two were in Bulacan, near Manila.

Beginning in fifth grade, I went to school in the poblacion of Lawaan, where there were more students, and many people I didn’t know. It was frightening at first. I had to be there by 7am for the flag ceremony, which meant leaving Guinob-an at 6. I walked with three girlfriends—Riza, Angelita, and Maricel. I would always make them try to leave early enough so that, along the way, I could run off into the guava trees and climb them. I didn’t always have food or money for snacks at school, and on days when I had neither, the guava trees were my friends.

The school day was long; from 7am to 5pm. There was a recess at 9am that lasted 30 minutes. You could get snacks if you had money to buy them. Most of the snacks that were available were native-made dessert, like ginataan, iraid (grated cassava with some fillings, mostly young coconut), and some others with names I didn’t know. Sometimes there was ice candy.

The next break was from 12 to -1pm, for lunch. The kids from the poblacion would go home. For kids like us from the barrio villages, if you have relatives in Lawaan, you could go to them. But for those who didn’t have relatives or a place to go, we would eat in classrooms that they allowed us to use. There was no food service; we were responsible for bringing our own baon. There was also a big tree and we ate our baon in its shade.

Baon was usually rice, with fish if we had any or sometimes sweet potatoes or other root crops like saba. Saba is like a native banana that you can boil and eat like a potato.

When we were done for the day I would immediately start walking. It would be dark when I got home. Those days, one of my jobs at home was to get water to use for washing, which I would either get from the pump in the village or a stream nearby, carrying it in big plastic containers that were very heavy. To this day I have strong arm muscles and I know they come from carrying that water and nothing else. I would help prepare food for dinner, doing simple things; nothing complicated. After dinner I would do homework.

Light was a lamp made with a bottle and a piece of cloth that hung down through a tiny little hole with kerosene. There was always pressure to hurry and finish; kerosene was expensive.
For every subject there was a teacher: Tagalog, Math, Science, Home Economics. We would go to different classes, move from room to room. This is when I remember being taught Social Studies but it was mostly about what happened over a hundred years ago; teaching us who the heroes were and about the wars.

By the time I was in sixth grade, there were dump trucks traveling along the rough road from Guinob-an to Lawaan. I think they were there because the government was building a power plant on Amandaraga Falls, and was building a road from Guinoban to the falls; the trucks were based in Lawaan. Sometimes we ended up getting home earlier because we could catch a ride on a dump truck but sometimes we got in trouble because we waited for a dump truck too long and one never came; waiting so long that we might not get home until 8 or 9pm. Anywhere from two to twelve or fifteen of us could ride on the truck when we were lucky enough to catch a ride on one