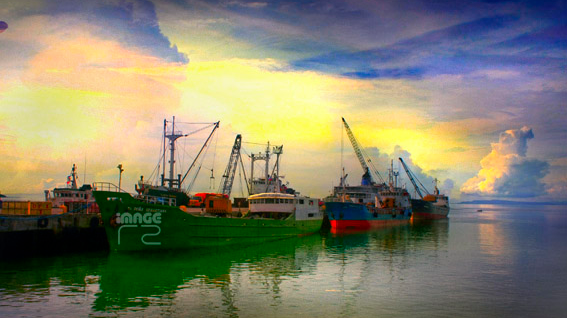 My awareness of the outside world was still very limited. For us, Tacloban was the only big city that reached into our world. My parents would go there, and eventually I became curious and began to nag them to let me go. Finally, after much effort to convince her, my mom took me with her.

We went on a ferry, a big boat that normally carried a lot of coconuts and copra. The owners of the coconuts rode on top, and the coconuts were down below. I don’t remember how long it took to get there; just that we went after dinner, walking to Bolusao which was where the ferry left from. There we waited in line to try to claim a place in the upper part of the ferry, which at that time was called Three Stars. It was a pump boat; a big, oversized banca that could carry up to a couple hundred people with no cargo.

At the dock in Bolusao, there were lots of other people waiting, and lots of dried coconut to be brought to market. The ferry was owned by the family of Ate Annie, my third and fourth grade teacher. It left early morning around 2 am. My first impression— it wasn’t so nice because I didn’t like the smell of the diesel, but on top where we rode, we could catch the fresh ocean air, so I enjoyed the ride.
Daylight was just arriving as we approached Tacloban. I was excited to see the city. I had heard stories my whole life. As a young kid, when our parents would talk about going to Tacloban, we always wanted to go; it seemed like a different world. I had no idea what to expect. Ahead I saw big ships; bigger than I had ever seen, and a city with real buildings, framed by the mountains.
When I finally got to go, it felt so big, and so strange to see big buildings and structures. I had never seen anything that compared, except perhaps the Spanish Churches in Balangiga and Sulangan— but in Tacloban the big buildings were everywhere.
I had always heard about this thing called a “popsicle” that was supposed to be incredibly good. So when I went to Tacloban that was my number one objective. When I got there and I had one—a buko flavored one—it seemed like the best thing ever.
What I remember most, though, is how dirty and smelly it was. All of the smells were new to me—diesel from the boats, gasoline from the motorized tricycles, plus other smells I couldn’t recognize. There was a different kind of clutter than I had ever seen in Guionb-an. The pier was busy. There were always a lot of boats from all different islands. There was shouting, and confusion.
In the next years I would go to Tacloban with Nanay and Tatay about a dozen times. We never went far from the pier— all the commercial establishments were in that area anyway. There were so many stalls and stores; you could buy what you want, if you had money of course. We would usually walk everywhere. Sometimes we might get in a tricycle, but that was it.
The way it worked was that we would bring copra with us that my Dad or brothers had harvested. If we had only one or two sacks of copra, we would just sell in Guinob-an but if we had five, six, or seven, we would take them to Tacloban. After selling the copra we would take the money and go buy whatever we needed and could afford—canned goods, noodles, sugar, coffee, all the things that you could buy cheaper in Tacloban, as opposed to buying it from a tiny store in Lawaan where the price would have been marked up. The idea was to try to get as much groceries as you can afford, especially the big fifty-kilo sacks of rice.
I decided I didn’t like Tacloban very much but it was still fun and exciting to go there and experience it in small doses.
When we were there, I saw the big barkos, the oceangoing ferries that carried people and goods all the way to Manila, more than a day’s journey. I saw the people getting on these and realized that this was how you get to the outside world. I didn’t feel a big urge to go there—at least not yet.
That would come in time.