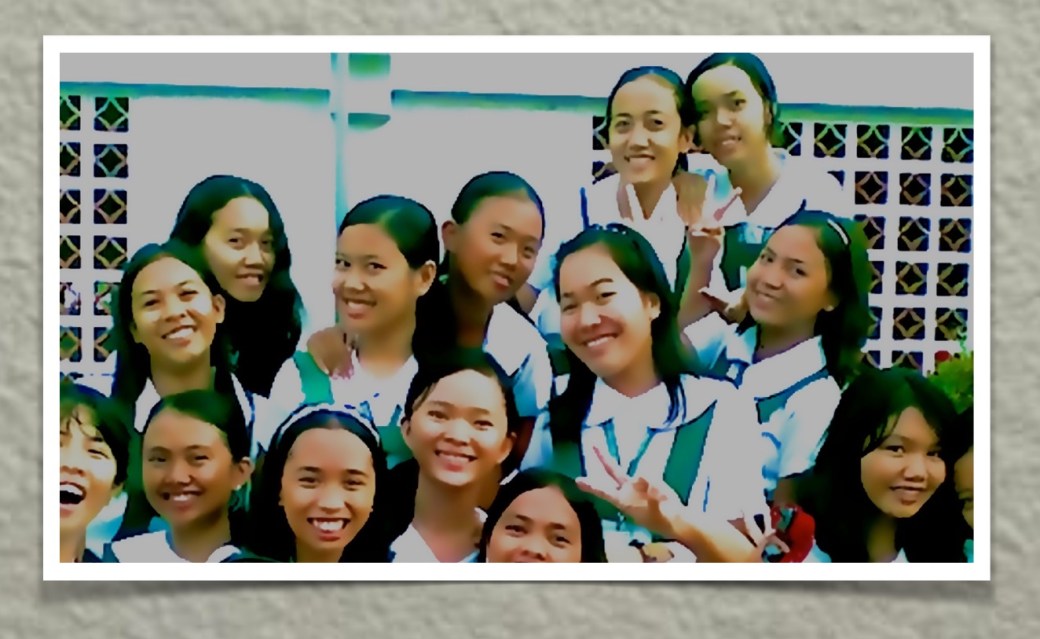 In the Filipino school system, you go to six years of elementary school followed by four years of high school. After elementary, I went to LSCHI—Lawaan School of Craftsmanship and Home Industries. There was also a private school, Divine Child Academy that had been founded by the Catholic Church in Samar. Divine Child offered a higher level of instruction, but it was never a possibility for me to go there; LSCHI was the only option. It cost 120 pesos to go to there for a year, and they would allow you to make the payments over time.

In my family, it was an accomplishment to make it as far as 7th grade; the only one of my siblings who had made it to high school was Rowena, who made it to her second year, or 8th grade, before dropping out.

Everybody else dropped out by the time they finished elementary. We didn’t exactly think of it as dropping out, more like beginning to work. Everyone had to begin to work sometime, and for the kind of work that was available, school wasn’t much help. There was fishing, farming, carpentry work or other things like that. It was only if someone decided to go away to Tacloban or Manila that

opportunities for different types of work were available, the kind that would be helped by an education.

My parents didn’t really push us hard to stay in school or at least if they did, I wasn’t aware of it. I just don’t think it seemed like a huge deal to anyone.

When I got to high school, I got into a group—what we call a barkada—who had no motivation to finish. We would walk all the way to Lawaan like we were going to school, but after the first few weeks we basically stopped going and instead would hang out at different places.

There were a lot of us, maybe eight or ten altogether, and we were just playing games, playing cards, playing with rubber bands, just hanging out. We would go home when we knew that school was over.

I’m not sure what I was thinking. Maybe it was because it was a bigger school—all the other barangays sent their kids there—and as a seventh grader we were the youngest. Maybe I was intimidated by that. Maybe I was aware that this was the point at which my siblings had all dropped out. Or maybe there were other things going on with me.

Our parents didn’t know, at least not at first. Then it got to be too late.

My parents found out and they were angry, especially my mom, who said she thought I was different than the others. For the second half of the year, after they found out that I had skipped most of the first half, I stayed at home. Although my mom was angry at first, she got over it. I helped with chores and began what I guess was becoming my path to adult life—had something not changed at the beginning of the next school year.

With our school, there is a period of enrollment during the summer prior to the opening of school when you must go and enroll. My mom had always taken me. This year, when I would have had to repeat the first year of high school, my mom didn’t take me or even push me to go.

I was a little surprised, but relieved.

“It’s useless,” she said. “I’m not wasting my time or money on it. Enroll yourself if you want to go.”

I didn’t enroll, but then it came to be June, the first day of classes.
I remember that day very clearly.

I was sitting by our porch. Most of the kids from Guinob-an, when they go to Lawaan, would pass by our house because we are on the main road and at the end of the town nearest to Lawaan. I still remember exactly how I was sitting on the porch. The kids looked nice, fresh, bathed, in uniform, happy as they walked to Lawaan. I began to feel bad—unexpectedly bad. What am I going to do this year? There is not going to be anyone here to hang out with.
I suddenly felt very left out and stupid, almost like I had awakened from a dream. I went right away I told my mom.

“I’m going to enroll myself,” I told her.

And that’s what I did.

This was when I started thinking a little bit beyond just the next day or next week. What would my future be like? If I didn’t go to school, I would for sure end up like so many girls, pregnant at seventeen and on to a life in the barrio. I loved my barrio and I wasn’t sure what else I wanted in life but as much as I loved Guinob-an, I knew that in my future I would somehow be seeing something more. That mythical outside world was beginning to exert its pull on me. I wanted to see what was out there.

So, I enrolled in high school again—by myself.
I didn’t have the money but at public high school back then they didn’t pressure you too much. It was 120 pesos for the year, and they would let you make partial payments. I didn’t have any money at all but over the year I paid little by little.

I began to hang out with my cousins Juliet and Marita. They were better, more serious about going to school, and it helped to be with them. From that time on, all the way until I graduated, I never missed school again. I thought—I want to finish this, and I don’t want to waste my time.

The only time I would miss school was when my mom was really sick—when her asthma got really bad—and I would have to take her to the hospital in Balangiga and stay with her.

Otherwise, I went every day. Even when there was no money, no food, no baon—I would still go to school. Sometimes I would come all the way home in the middle of the day and try to scrounge for food there, then go back to school, hitching rides so I could make it back and forth in the time they gave us off for lunch. Other times I just wouldn’t eat anything all day, and would eat at night when I got home.

To this day I’m not really sure where the motivation came for me to go back to school like that. I’m not sure exactly what I was hoping would happen as a result of finishing school. And I wasn’t being pressured by anyone to stay.