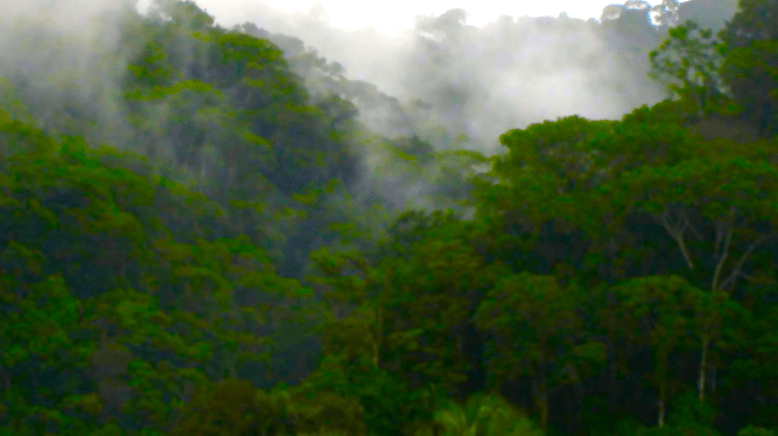 Nanay’s full name is Tarcila Bohol Llevado and Tatay is Loreto Esquierdo Llevado, both of whom have many generations of ancestors in Samar. We lived in the house in Guinob-an that my mother grew up in, which was the house of her mother, my grandmother, Sylvestra, whom we call Inay Sylvestra.

Guinob-an is a coastal village (we call it barangay but sometimes also use the Spanish word barrio, or the English word village) that lies within the municipality of Lawaan in Eastern Samar—in the Leyte Gulf. But as soon as you go a few hundred yards from the water there are steep hills covered in coconut trees and thick vegetation which quickly becomes the Philippines’ largest true rainforest—a place of dense vegetation, waterfalls, huge limestone caves, and exotic animals including the Philippine eagle, monkeys, wild hogs, tarsiers, lemurs, flying foxes, and snakes—especially Asian cobras and king cobras. Ours is a large island surrounded by sparkling waters that teem with marine life. The interior is a vast largely unpopulated mountainous rain forest.

There was a time, before I was born, when Nanay and Tatay went into the forest and had a farm and a home in an area they cleared from the jungle. They told me stories of living a life there completely without money—growing crops, fishing and hunting.

According to Nanay, at night when they were living in the jungle my dad would go to spear fish in the river, and when he went, he would tell her to keep out the lusong and bayo that she used to grind rice, and if she became frightened or threatened she should pound the bayo into the empty lusong, which made a very loud sound like a drum, loud enough that he would hear it wherever he was and come running back to help her. This made her feel safer in that little thatch house alone in the jungle.

One reason she was afraid is that for centuries there have been legends of the onglo who were believed to be in existence and roaming in the deep forests of Samar. The onglo were naked hairy human beings, reputed to be cannibals, jungle creatures who wandered without homes, and who would lie down and sleep wherever they were as the need came to them. They were said to smell like the wild hogs. My mom didn’t live exactly in fear of them— she wasn’t completely sure she believed in them—but at night, in the forest, alone, with the sound and smell of wild hogs sometimes in the air, it was easy to believe they were out there just beyond the light, in the darkness of the jungle that surrounded their little house.

They spent years in the jungle, living off the land, but eventually they came back to live with Inay Sylvestra in her house in Guinob-an. There they started having babies and raising a family, and it was here in the home of Inay, just a few hundred feet from the sparkling blue waters of the Leyte Gulf, not far from where it opens to the Pacific Ocean, in a small native house underneath coconut trees, with a big star apple tree in the yard, that they bore and raised all 12 children with love, laughter, and almost no money at all.