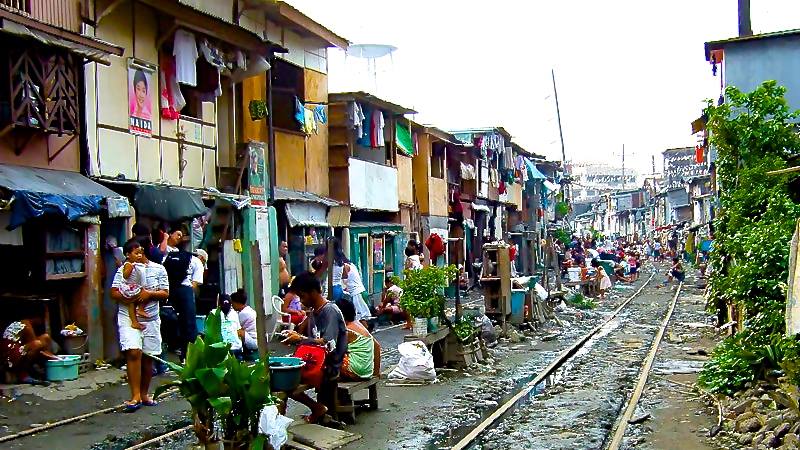 When I first arrived in Manila they didn’t have a regular baker at Beth’s store, but shortly after, Beth hired a young man named Marlon and his wife to be the bakers. They had a baby and I got to know Marlon because of the baby. She was a cute kid and I was very friendly with the baby. I loved to play with her and make her laugh. I wasn’t exactly homesick but the baby felt like home.

Marlon became interested in me—very interested. I was still skinny but not quite like before, and I had learned a few things about how to improve my looks—nothing fancy, but I guess there was more awareness or something, because Marlon become very attached to me and began to “make ligaw” as we say—courting me. I said no, you’re married but that didn’t stop him from trying, and our work put us together.

I wish I had been stronger and more sure of myself, or just stronger, but I wasn’t. He was a few years older, smart and good-looking, and very, very persistent in a charming way. I eventually let him kiss me. He wanted to do more but I wasn’t ready.

Every day, Beth’s nanny would take Beth’s children to school, but one day Beth came to me and asked if I would go with her to take the kids. I was confused—the nanny was there—but was happy to go with her.

After we dropped off the kids, Beth took me to the food court in Caloocan and sat me down and confronted me about Marlon, telling me that she knew about it, and what was I thinking?

I began to cry and said I was sorry and that I didn’t’ want it to continue. I knew it was wrong and I should never have done it.
She asked me , “Do you want to go back?”

I said no, because if I go back, Marlon will be there and he will want to continue.

Beth was stern but understanding. I don’t think this was the first time she’d ever had to deal with something like that. She suggested that she would take me to her sister’s house until we figured out what to do.

I waited there for two days, doing nothing, feeling stupid and miserable. I didn’t know what was going to happen to me.

With the money that she owed me for the current month, she had a bought a ticket for me on the boat back to Samar. After paying for the ticket from my salary, there was about 300 pesos left over, and she gave me that.

Her attitude was I’m not going to let anything happen to you, because I know your mom, and Rommel, and I respect them. But you can’t stay here, and I can’t be responsible for you in Manila. You need to go home.

I didn’t fight her about it.

Perhaps she was right.

The next day one of Beth’s friends, a gay guy named Jhun who was very funny, came and got me and took me in a jeepney to the pier. I was sad and almost crying but he made me laugh. He kept worrying that people would see him with me and think I was his girlfriend, and he didn’t want that. He managed to keep me from crying with his jokes and chatter.

At the pier, he had to stop at the gate as you can’t go past the gate without a ticket. We said goodbye, and I went in.

I walked on the pier.

I could see the ship ahead, the Dona Paz, the same one that had brought me here a few months earlier, getting bigger and bigger as I kept walking.

Then I stopped walking.

Looking back, Jhun was still there, watching me.

I kept walking, getting closer to the boarding gate.

I turned around—I looked back, and saw that Jhun was gone.

I began to think seriously about what I should do. There were a million reasons I didn’t want to get on the Dona Paz and go back to Tacloban and Samar. I hadn’t even begun paying back the P600 loan from Uncle Pablito and if I went back to Guinob-an, I would never be able to pay it back. I had only just started helping my family, sending money to them each month, and this would be the end of that. And my life—I felt like my life hadn’t really even started yet.

The boat was boarding and it was time to get on.

I made my decision.

I turned around and walked out of the pier, back through the main gate, and onto the street.

The only way I could get to Igak’s, I realized, was by taxi since then I wouldn’t have to know the bus rand jeepney routes. I approached a taxi and asked the driver how much it will cost to go to the Cubao Market, which was near Cambridge and from there I could find Igak’s place. He said 130. I thought okay, I’ll still have P170 left.

An hour later I had found my way back to Igak’s.

I stayed there for a few days, living off of Igak’s generosity. I was very shy, very conscious that I was another mouth to feed. I was helping in any way I could but I needed to get out of there because it wasn’t fair to Igak to have to feed me.

Then one day my aunt, Tita Mary, came by. She was the wife of my father’s brother, who died some years earlier, and she had come to Manila where she lived in a different squatter area; the one called Fil-Am, because it was adjacent to a wealthy subdivision called Fil-Am.

Once again, things would change.

She said she had heard about me and wanted to help. So she took me to her tiny squatter house in Fil-Am. You can stay here, she said. I was grateful, and happier to be with a relative.

Living in Mary’s one upstairs room were Mary, her grown son Jerry and his wife Glacy, Emily, who was Mary’s niece and was my age, and Mary’s teenage son Lee. The only one with a job was Mary—part-time, as a Metro Aide, which is what the government calls teams of street sweepers who keep the streets clean, a never-ending job. Her small salary had to provide for everyone.

I found a job nearby at an open-air dry market selling dry goods and clothes. It was a pretty good job, but it was seasonal, only until Christmas, and it was already September so it would only last for a few months and then I would need to find something else. They gave me three days a week and paid me 50 pesos a day.

Meanwhile, Mary left and went to Samar, and since I was the only one in the house with a job now that she was gone, my fifty pesos had to be used to buy food for everyone. I didn’t mind ;I was happy to be with family, and Jerry would sometimes get work washing buses, which helped a bit.

The bottom line was that we were barely getting by. Many, many times there just wasn’t enough food and I remember being hungrier in that house than I ever was in Samar—and I had been plenty hungry, plenty of times.

One day my brother Rommel came by and Marlon was with him. Marlon seemed genuinely surprised to see me, and Rommel didn’t know the story of what happened between us, so it may have just been a coincidence that Marlon showed up that day. Marlon asked me how I was and could see that my situation was not good.

As a baker he was very much in demand; it was easy for him to get a job anywhere, and he told me that he had moved out, left his family and was looking for a new job. He mentioned something about finding a job where I could be his assistant but I didn’t take it seriously, and assumed it was just talk.

A week later he came back and told me that he’d found a job where he negotiated that he could bring his own helper, who would be paid a regular salary and would be provided room and board at the bakery where he would be working.

He wanted me to be his assistant.

For me, it was a very hard decision. I had already gotten in trouble once for being with Marlon, and the fact that he was no longer living with his wife wouldn’t make it alright in the eyes of my mom if she found out about it. And I’m not sure it made it all right in my eyes either.

But I remember lying there in the squatter house, trying to sleep, genuinely hungry with nothing to eat—and all I could think about was how nice it would be to live someplace where there was enough food, a shower, and a bathroom; all of which seemed impossibly delicious luxuries to me.

It lasted about two months.

That was when Mary came back from Samar. As it turned out, she brought my mom with her. They were expecting to find me at Mary’s and when I wasn’t there, my mom went to Rommel, who at first tried to keep secret my situation but my mom finally got him to talk.

And Rommel told her the truth…