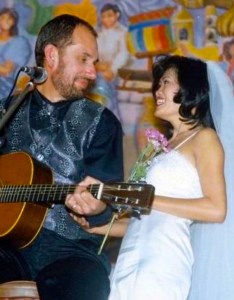 When the restaurant opened in July, I was very busy. I worked six and sometimes seven days a week, and made enough to send a thousand pesos to my parents at the end of the month. The bar I was responsible for as bartender was both a service bar for the restaurant and a bar where customers would sit and order drinks. I was surprised and a little frightened to learn that most of the customers were Americans and Europeans from the companies on the base.

It was my first experience meeting foreigners. I was very shy to talk to them. My English was not very good, and they were all so big, and I had a very hard time understanding them. Sometimes they tried to talk with me, flirting and making ligaw but I just kept my head down and tried to serve without making eye contact so I wouldn’t have to talk to them. I was absolutely not ready to even carry on a conversation with these scary guys.

One day in July a guy came in and I noticed him, because he was the tallest human being I had seen in my life up until then. He came in with a friend, and they sat at the bar, had two beers, and left. A few days later this same guy and his friend came back, and I heard enough of their conversation to know that they were stopping by after playing golf.

Then a week or so later, Kuya Bill, the owner, came in sunburned from fishing all day, and the same tall guy was with him, also sunburned. Bill made a point of introducing him to me, which shocked me a little bit. His name was Michael. The big shock was that he spoke Tagalog—the first foreigner I had met who spoke our language.

He was friendly and asked me a few questions about where I was from, and told me that Bill had said that I was a good worker, and that I sent money home to my family regularly. I felt shy, but was pleased to hear what Bill had said. As for Michael, I didn’t think too much about him, except that I could at least communicate with him, which was a big difference from the others.

A few days later Michael came back and sat at the bar where he ordered food and club soda and chatted with me while I was working. He didn’t say too much about himself; just asked me a lot of questions about where I was from, and showed a lot of interest in Samar, and especially about the fishing there. He told me that he and some partners had gone together to buy a sport fishing boat which they called the Spirit of Subic, and he was trying to learn how to fish the waters off Subic.

That was why he and Bill had been out fishing together; they were both interested in developing a sport fishing business in Subic. Although Michael didn’t talk about it right away, someone else told me that he was a movie producer and director, and was a consultant to Dick Gordon, who was the Chairman of the SBMA.

Months went by. I became a little bit less shy. There were other foreigners from inside SBMA who would come and talk to me, and I at least got to where I could understand them, sort of. We Filipinos speak English in a certain way; we say every sound carefully and clearly. These Americans spoke it completely differently. At first it sounded just incomprehensible to me, filled with sounds that I didn’t recognize.

But as I heard them speak it more often, it began to make a little more sense. One of Michael’s friends was the head of a company called Coastal Petroleum. His name was also Mike; he was kind and definitely interested in me. Another was Phil, who was from an American telephone company that was working with the Philippine phone company, PLDT, on a joint venture inside Subic. There were also FedEx pilots who would come in.

I suppose I had blossomed a little bit by this time. I had learned a little bit about hair and makeup, and although I still felt skinny, I wasn’t skinny everywhere, and somehow I think the outfits in the restaurant made me look a lot better than I did in schoolgirl clothes, which were baggy and must have accentuated my skinny-ness.
Michael kept coming in a couple of times a week, usually at times when we weren’t busy, and would sit at the bar.

Other than the fact that he spoke Tagalog, the big thing I remember is that he was just more curious than the others about the Philippines, and the world I lived in. It was easy to talk to him because we talked about things I knew about.

As this all unfolded, I was also beginning to understand some things.
Growing up, I never gave any thought to how it was that “abroads” from Guinob-an, for example, had ended up married to American servicemen; but now I could see what it must have been like, for example, in Subic when the Navy was there.

There must have been jobs for everyone—bartenders, waitresses, store clerks. And, as I learned, for the adventurous, there had been jobs as dancers in all the many clubs. By the time I got there, clubs were no longer allowed to have dancers. Dick Gordon had completely outlawed that in an effort to remake the image of the former Navy town. But the tradition was there, and I think some of the customers who talked to me thought nothing had changed. I could feel it in their attitude.

As I grew to understand this, I was suddenly reminded of something that had happened to me years earlier in Guinob-an. Lina had given me a pretty purple T-Shirt that had “Subic Bay” and “Olongapo” written on it. I wore it to Lawaan and someone, a man from Lawaan, started teasing me about Subic Bay and Olongapo. I had no idea what he was talking about at the time.

But now I understood.

For my 21st birthday in September of 1994, Michael gave me a party where I worked. He bought a cake and some champagne. It felt very special to me, maybe more so than he realized, because it was the first time in my life I had ever been given a birthday party.
Sometime in October, perhaps a month after my birthday, Michael asked if I would go out with him on a date. He made it very clear that he just wanted to take me to dinner at a friend’s restaurant. I believed him, so I said okay, and that’s all it was. That night we talked and talked; in truth I had never talked to any guy that much, or about that many things.

Little by little, we began to get closer, and sometime before

Christmas we became a couple. That was nineteen years ago and we’ve been together ever since.

Soon after we became a couple, I mentioned to Michael that I wanted to go to college and he told me he would support me if that’s what I wanted to do. So I quit working and with Michael’s help was able to graduate from STI Institute in Olongapo. It was just a two-year program but after graduation I got a good job inside SBMA at Subictel—an office job, which made me, and my parents in Samar, very proud. 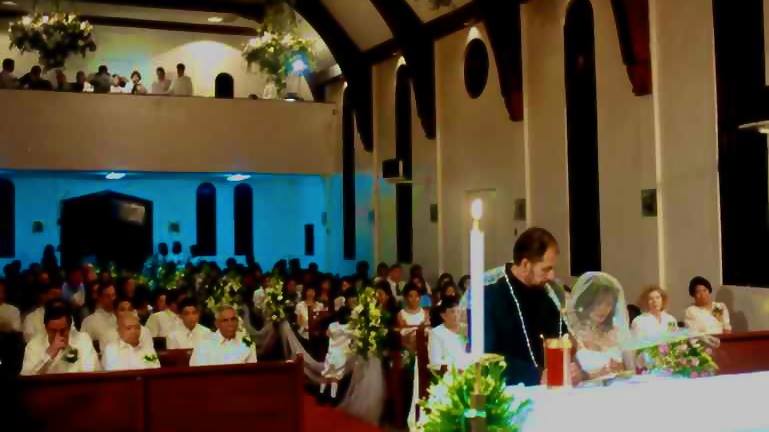 In 1999, four years after we first met, we were married in the chapel at Subic Bay in a ceremony that was, for me, like a fairy tale. Michael planned everything like the film director he was and we had everything; even a choir from Manila and a roasted cow at the reception. My mom and dad were there, and many of my brothers and sisters.

Michael’s mother and Patrick, Pilar, and Kaitlyn—his three children from America—came all the way from Florida, which made me feel truly welcomed into their family. And Michael’s other daughter Michelle, whom I’d helped raise during our time together in Subic, was there with us as well. We were blessed by the joy of families from such different corners of the earth joining together. It was a perfect wedding on every level.

* * *
During my almost twenty years with Michael, I’ve seen the world, I’ve had challenging jobs managing our restaurant in Subic Bay, and then managing the administration of our film company in Los Angeles eventually after we moved there in 2001—but it’s still very easy for me to close my eyes and feel like I am still that skinny little kid who would run down to the water when the boats were coming in and eat the leftover rice that my dad would save from his baon, or who would walk up into the hills with my mom and then climb in the trees, eating sugar cane while my mom worked below in our farm plot, or who would scramble into the guava trees on my way to school in search of snacks.

I treasure the way our life was back then, and am so glad that I grew up when I did—when the outside world was a distant dream, where the sun was as bright and warm as the sun can be, and where the water was clean and pure and teeming with life, and where everyone knew everyone and helped everyone. I am who I am because of that, and I would never change any of it, even my mistakes, because I know I learned from them.

My dream is to someday go back to Samar, to live there and feel at least the echoes of the way it was. Perhaps my greatest blessing is that Michael shares my dream. He dreams of having a small fishing resort to catch the same malasugi and salasugi that my father caught, and I dream of building a proper church in Guinob-an, and living among my nieces and nephews—all fifty of them. I will never be lonely in old age, even if Michael leaves this world before I do.

I dream of the warm breeze from the Leyte Gulf, the fishing boats coming in each day and the neighborhood kids running down to greet them as I did not so long ago. I dream of coconut and mango trees; of buwa and ginataan and iraid, and pitiw and patantero, and all the sounds and smells and joys of life beside the sea in Guinob-an.

I dream, and I worry.

I worry that a typhoon has changed everything, forever.

One thought on “Chapter 22 | Michael”