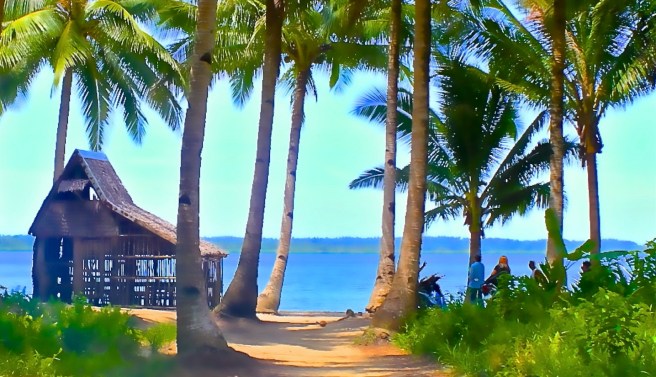 My father is a quiet, hard man whose main work for half a century has been to paddle out to sea in a small boat and catch blue marlin, sailfish, and other great and small fish. Even today, at eighty, he is lean and hard-muscled with clear eyes and an erect, proud posture.

A few years before I was born, my father became mysteriously ill. For no reason that anyone could understand, he started losing sensation in his legs, and then eventually lost all sensation from his waist down, until he could no longer walk or move his legs at all. He was at home, sick, for nine months and during that time my mom had to do everything, taking care of all the children and providing for the family. She called in a tambalan, a traditional healer, to try and cure him but the tambalan couldn’t do anything.

After that, it was up to my mom, and she was very determined. Unlike my father who is quiet, my mom is a talker and she talked to him constantly, urging him and encouraging him and telling him that it would pass, that it wasn’t permanent, that it was just a matter of time. If anyone could simply talk a cripple into walking, she would be the one.

But she did a lot more than just talk.

Years later when she told me all this, she said that she saw my Dad really work hard on trying to learn to walk again, and she was proud of him for it, and loved him for it. He was very, very determined, and would hold on to the wall, and try again and again. Little by little he got stronger, until eventually he could walk again, and fish again. We never knew what caused it, but what we did know was that neither my mom nor my dad gave up, and eventually he was cured.

I wonder what would have happened if both of them hadn’t been so determined.

Altogether they had twelve children. I am the youngest. They are, from eldest to youngest, Remy, Ronedo, Emma, Alma, Danny, Sonny, Eva, Liza, Rowena, Lina, Rommel, and me—Rena. In our culture, we call older brothers kuya and older sisters ate (which looks like the English word “ate” but is pronounced AH-teh) as a way of showing respect. As the youngest of twelve, I had a lot of kuyas, and a lot of ates in my world.

By the time I came along, a few of the older ones had left, and a few others were starting to have babies of their own, some of whom lived with us, so even though I was the youngest of the “originals”—in another way I was the eldest of the second group of grandchildren (my nieces and nephews) who would grow up around me. I was their tita (aunt) of course, but our ages were so close that it felt more like being their elder sister.

My first years of life were marked by two major events. When I was almost one, I became very ill and my parents became convinced I was going to die. We are Catholic and they offered prayers and promises of penitence if I could only live. They prayed to St. Anthony of Padua for intercession, because in Samar there is a very special church named after him in Sulangan, on the southern tip of Samar, where people make pilgrimages to pray for help, and where we also make pilgrimages to give thanks if our prayers are answered. When I made what seemed to be a miraculous recovery, they vowed to make a trip the San Antonio De Padua Church in Sulangan every year to fulfill their promise of penitence. This became an annual tradition.

The illness happened before I was ten months old. Then a few months later on Christmas Eve, 1975, when I was 15 months old, an accident occurred that literally left a mark on me for life.
My mother was in Manila at the time and Inay Silvestra was in charge of the house. We didn’t have an indoor kitchen, so she was out in the yard cooking the traditional Noche Buena Christmas Eve meal that would be served at midnight. My sister Eva, who was then about twelve, was caring for me. My other sister Liza, who was seven, was helping.

Inay asked Eva to give me a bath and put me to bed. I was on one of two benches in the sala, or main room. Each bench had a kerosene lantern on the end. Eva brought out a big pot filled with warm water and gave me a bath, and tried put me in a dress for sleeping. But I wanted to sleep in a special dress, one that had a picture of a cat on it. Eva tried to convince me to leave the dress for tomorrow, Christmas Day, but I insisted and so Eva went off to fetch the dress. She returned and didn’t notice that while she had been gone, I had moved closer to the kerosene lamp at the end of the bench. Eva then began wrestling me into the dress.

As she did this, Liza was on a sleeping mat on the floor next to the bench, rocking herself to sleep, sucking on her thumb as she always did. Eva would later tell everyone that the first sign of trouble came when she heard Liza on the floor making some strange sounds but Liza had her thumb in her mouth and the sounds didn’t really register with Eva, who had no idea what was happening until she looked up and realized that the front of my dress (made of very flammable nylon) was in flames. I hadn’t started screaming yet because the flames hadn’t reached my body. Eva quickly put out the fire but not before the flames and melted nylon reached my stomach, creating a horrid third degree burn in which the nylon materials melted into my burned flesh.

Once I was burned, of course I started screaming, loud enough for the neighbors to come running. The first to arrive was my uncle Pablito, who lived next door. Pablito shouted at Eva for letting such a thing happen; he was so angry he grabbed a stick and made her palo (i.e. he whacked her with it,) all the while trying to calm me as he angrily asked my very scared sister what was she thinking—was she trying to make Christmas lechon (roasted pig) out of the baby?
There was no thought of taking me to a hospital. We had no money and there was no hospital in Guinob-an; it just wasn’t part of our world. Instead, Inay washed the wound with warm water and an herbal mixture that she prepared, and then she poured powdered penicillin purchased at the local sari-sari store, directly into the wound.

This, plus cutting holes in the front of my dresses where the wound was healing, was the treatment I received for the burn. If greater problems had developed, they would have called in a tambalan or native healer but as it turned out it wasn’t necessary.

Painful days and weeks passed but the penicillin kept the infection at bay and the wound eventually began to heal. Today I still have a four-inch scar which you can clearly see in bright light (not so much in dim light); a scar that is just visible enough to prompt a question or two when I’m in a swimsuit.

I’ve often thought about how painful that burn must have been, and how living with that pain for weeks and quite probably months as a young child must have affected me but I can’t really remember the experience so I just don’t know.

I’ve thought about trying to have it made completely invisible but I prefer to keep it as a reminder of things past. It feels to me like it is part of what connects me to those long ago days, and the way life was for us back then.