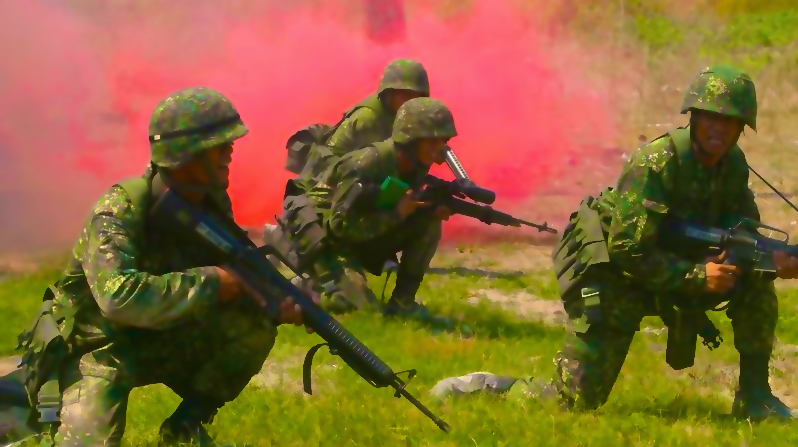 One night my father was surrounded by government troops in the middle of the night when he was outside near the house simply to go to the bathroom. They held him and questioned him aggressively until well after daylight. We could hear them shouting at him but we couldn’t do anything about it.

I was crying and shaking with fear that he might just disappear. We were all completely helpless. They let him go finally and I remember hugging him for a very, very long time.

Another time they grabbed my brother Danny, who had returned home to live in Guinob-an after having spent several years living with relatives in Mindanao. He’d been forced to leave Mindanao because the government wouldn’t issue him a cedula (government ID) there on the grounds that he wasn’t from there.

So he came home, and had trouble getting one in Guinob-an too. The military questioned him and thought it was suspicious that he didn’t have the cedula. They blindfolded him and strung him up so that only his toes were touching the floor, then hit him in the stomach and about the head with the butt of a gun, questioning him, trying to make him admit to being an NPA guerilla. He couldn’t admit anything because he wasn’t one.

As this was going on all of us were frantic, afraid that Danny might just disappear. My mom frantically talked to all the town officials that she knew, trying to get the troops to relent and release my brother. Finally, by the end of the day, she got through to someone who was able to convince the military to release Danny. Shortly after this Danny had to leave, fleeing to Bulacan, near Manila, where he joined another brother, Sonny, and worked as a farm hand.

Things were getting worse and worse.

Not long after the incident with Danny, when I was ten, Guinob-an was filled with rumors that the government had singled out the town as a hotbed of insurgent support and were planning to either burn the village or drive through the town and shoot up all the houses. Looking back, it’s obvious it was just a rumor—but at the time we all took it seriously.

Afraid for their security, many families dug holes under their house so that they would have something like a bunker to retreat to in a firefight. Once, my cousin Jenny and her family dove into their bunker during one exchange of gunfire, only to discover that the bunker was filled with giant Filipino fire ants. They had to choose between the bullets or the ants and they chose bullets— that’s how bad our fire ants are.

The situation erupted into a full-blown battle later that year, 1984. It was a normal day around 3 o’clock in the afternoon. Me and my brother Rommel, who was eleven, had just filled a six-gallon water can with drinking water from the stream. The two of us were carrying the heavy can between us, suspended from a stick on our shoulders, and we had just started walking home when I heard gunfire, far away at first. I stopped, told Rommel what I thought I had heard.

We walked a bit more, then heard more bursts of gunfire, closer now, hundreds of rounds, and both us finally realized it was real and nearby. We dropped the water and ran home, but our house was empty because, as we would later learn, my Dad had gone to his mother’s house to visit his parents in Bolusao, while my Mom had gone to a cousin’s house to play cards, taking with her the two grandchildren who were living in the house at that time.

When we got to the house and found it empty we were on the verge of panicking and had no place to turn, so we went next door to the house of my uncle Pablito, and there saw my cousin, Pablito’s twenty year old stepson, crying on the floor. We asked “why?” He said that his parents were tending their farm, and he believed that that was where the gunfire had begun. He was sure they had been killed. He couldn’t go there because he believed if he was found by the military alone they would kill him.

He truly thought his parents were dead.

Meanwhile the gunfire was getting closer, and townspeople were running from the town in the only safe direction—the water. Rommel and I joined them, diving into the water and swimming out to the deeper water, out of range (hopefully) of any bullets. In the deeper water I lost my favorite skirt—an orange one—because wearing it I couldn’t swim properly.

We waited in the water for hours, surrounded by other townsfolk. The firefight continued, then finally wound down and the gunfire stopped. While in the water, someone explained that the military had entered the town just as an NPA group was arriving to hold a seminar, and this had led to the battle.

Eventually after the gunfire stopped, we could see the military coming fully into the town, which we understood meant that the NPA had successfully fled into the jungle hills beyond the town. We waited until it seemed safe then finally swam in to shore with the others.

As we came out onto the land, we saw military running out of the town in the direction of Lawaan. Suddenly there was gunfire again. Everyone started to run back toward the water. There was a boat on the edge of the water—a little binigiw—and Rommel and I jumped in it as a man was trying to pull it into the water. He was a father with three kids and he screamed at us to get off the boat so he could pull it into the water. We jumped off, still hoping to catch a ride but as soon as it was in the water it was gone and we were left standing on the beach. We found someplace to hide, and eventually the gunfire stopped.

There were other incidents. Soon after the attack in Guinob-an, there was a major battle on November 16, 1984 in Lawaan Poblacion, the town proper of Lawaan municipality.

In writing about this situation at the time, Mano Crispin Gavan said: “Friends and even relatives are now mistrusting each other, suspecting one or the other as an NPA sympathizer or supporter of active members. There is now widespread agitation as many residents have gone to other places to escape reprisal or harassment from either side.”

Soon after the battle in the town, just before Christmas 1984, my parents were among those who decided it was time to evacuate to a safer place.

One thought on “Chapter 8 | Firefight”