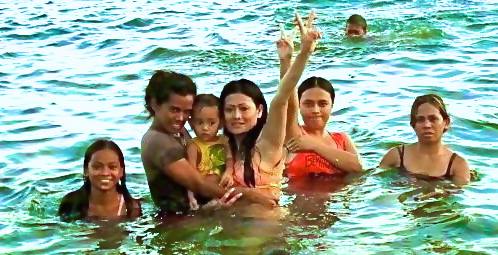 Now, in 2015, almost two years have gone by since Typhoon Yolanda (international name Haiyan) changed everything. Our part of Samar was stripped of trees; in Guinob-an of the 230 families, almost 180 were left without shelter. All 28 fishing boats were lost. We lost some people immediately — others, especially older people, died in the months afterwards — months spent without electricity, without propers helter, and even without shade, so important on our hot, humid island.

One who died in the months after Yoland was my mother. I can’t say that the typhoon caused her death; but I do know that she and all of the old people in our town, and towns like it, suffered terribly. She passed on March 10, 2014. My heart was broken.

Michael and I began a project, trying to help replace the fishing boats that were lost. We were joined by Elma Gacho Greenwood, and then our efforts were discovered by Father Chito Dimaranan. As a result, two years and a lot of work later, thirty-six boats have been completed and provided to fisherman in Guinob-an and Lawaan. But this only scratches the surface of the problem — a problem that still exists, and will continue to exist for a generation.

But while a neverending amount of work remains — the people of Samar are making progress. I will leave you with some pictures that say more than my words can ever say.